Grandeur Park Residences is a new condominium that will be launched for sale in early 2017. It occupies a rather attractive location – just beside Tanah Merah MRT station (with a covered linkway between, 50 metres or 1 minute walk), in a private residential estate that combines a condominium belt with low-rise landed housing. 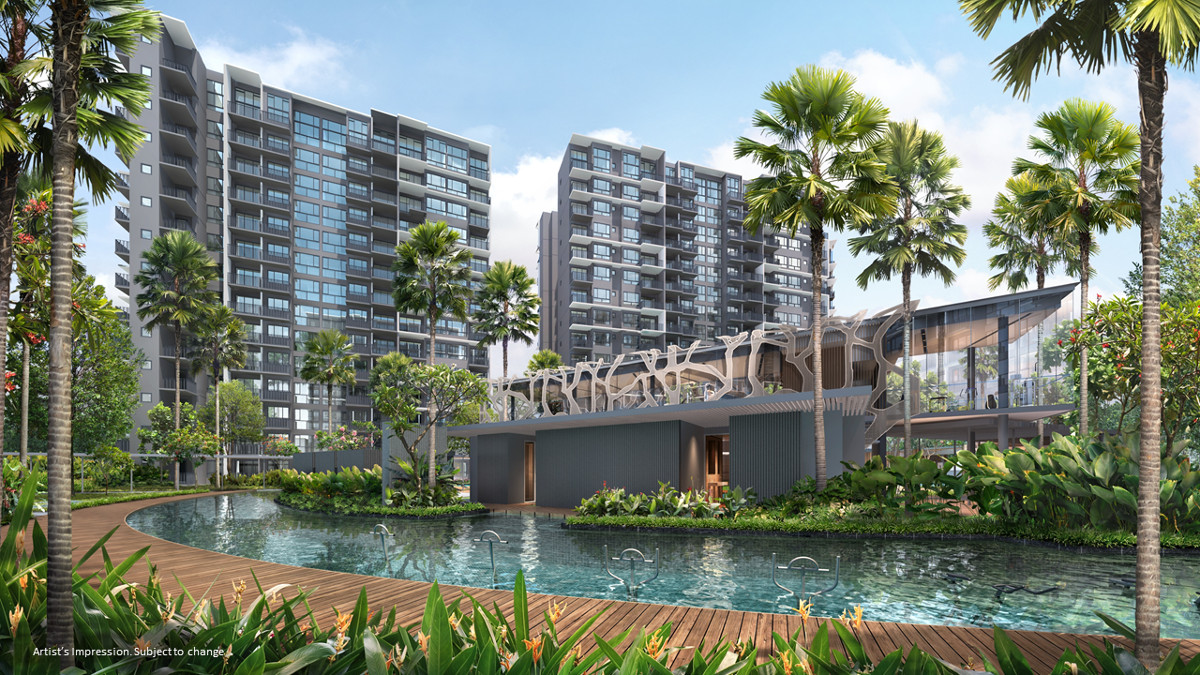 As the aerial view below shows, the south of the site that fronts Jalan Limau Kasturi (see map at end of page) also overlooks the landed homes of Bedok Ville. From there towards East Coast Park, it is pretty generally low-rise.

Higher floor units facing that way can expect the south winds, and perhaps even glimpses of the sea. These units will likely be snapped up first.

There are not many new homes on the doorstep of an MRT station that get unblocked landed views. If you would like to be kept updated on this Grandeur Park condo, just leave your contact details below. 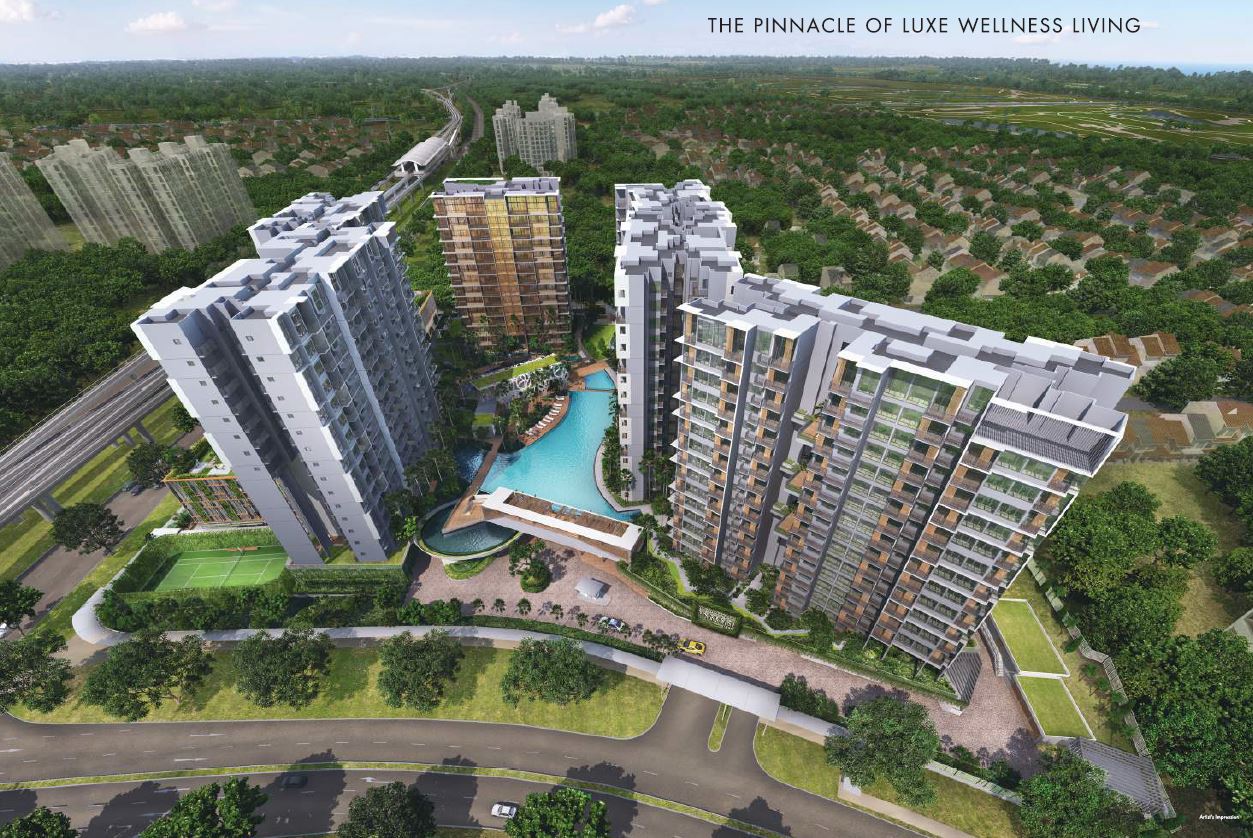 The location of Grandeur Park condo makes it an attractive one for investors, as well as for parents securing a nice home for their families. 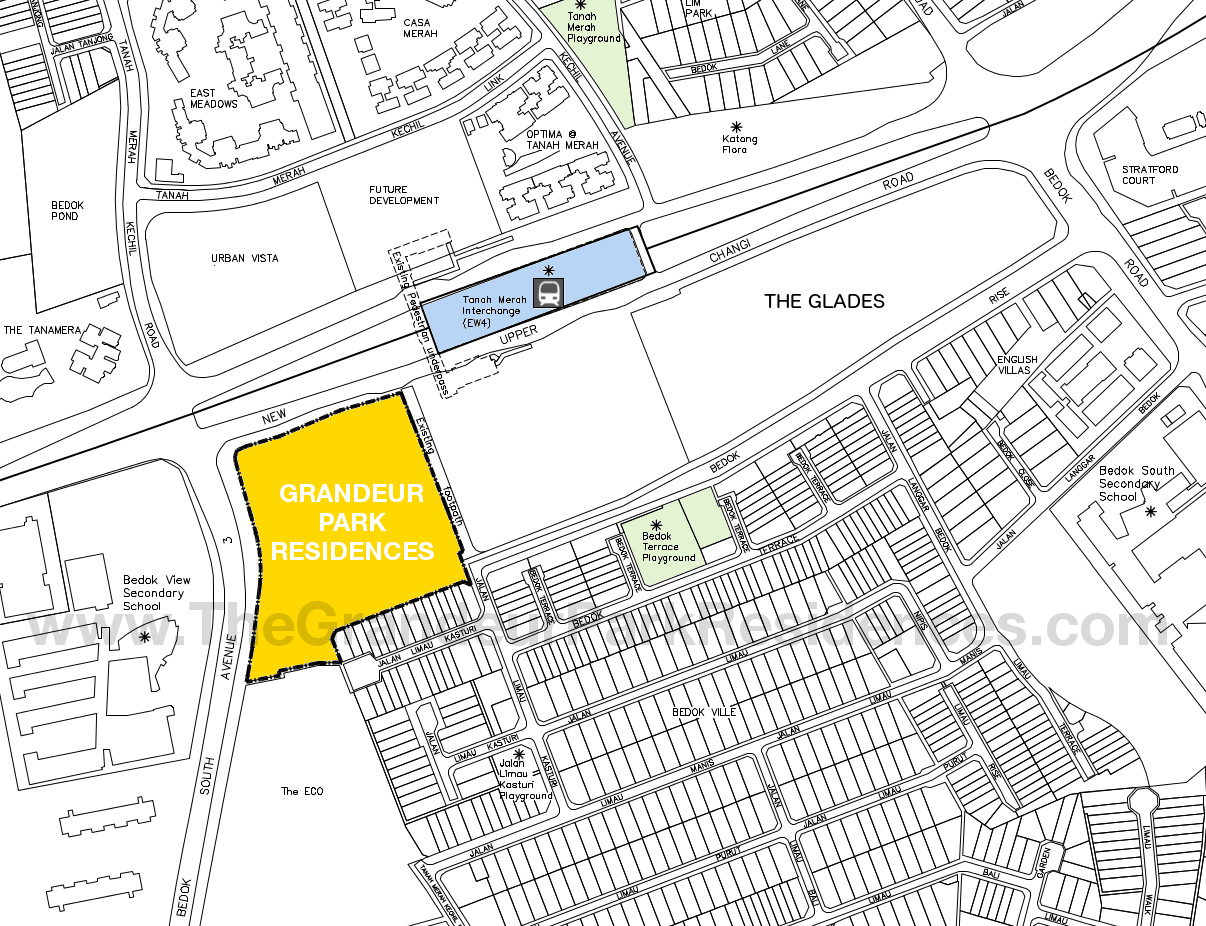 Please leave your contact details here if you would like to be kept updated on Grandeur Park condo. Good chance for early birds to pick a nice unit.

The Grandeur Park indicative price ranges have just been announced, as follows:

The above Grandeur Park price ranges look pretty reasonable for a location right next to an MRT station, and certainly lower than the nearest neighbouring launch.

If you have a very limited budget and would like one of the lowest priced units here, do sign up below to be one of the early birds, as such units tend to be snapped up on the first day of launch.

The URA land sale for this Grandeur Park site was pretty hotly contested by 8 bidders. In fact the top bids came in rather close, and it’s easy to see why. There are only so many sites that can fit immediately around an MRT station. In addition, land around stations are mostly already built up.

Tanah Merah is possibly one of the few to still have virgin land left on the East-West MRT line. Much of it is already taken up. There is only one small land parcel left across the road, and another plot between Grandeur Park and The Glades.

Analysts are expecting the last plots to be fiercely contested when URA finally releases them for sale, perhaps a couple of years down the road. In which case, it would be good for Grandeur Park buyers, as that would drive values further up.

Where new launches are concerned, there is little competition to Grandeur Park. There have been no new launches around this location since the Glades launched in 2013. (In much the same way as the Clavon condo will have little competition when it launches for sale, as the nearby Clement Canopy has already sold out. Hence the Clavon at Clementi will likely also draw a good crowd at its VIP Preview.)

The earlier launches like Urban Vista and eCo have sold out. The nearest developer sales on the East West MRT line with units still available are either Coco Palms in Pasir Ris, or Sims Urban Oasis at Aljunied.

The Grandeur Park Residences showflat has the following 3 types of show units: a 2 bedroom classic, a 3 bedroom classic, and a 5 bedroom unit. Currently, the showflat shows an actual unit, as is the case with the Parkwood Collection showflat, and at other completed projects.

If you would like to view the Grandeur Park show unit, just drop us a line below. 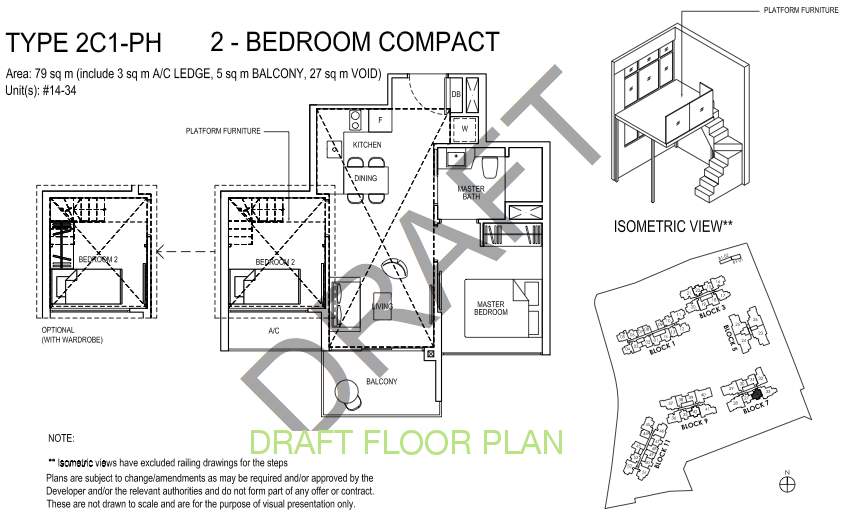 This concept suits the lifestyles of younger residents, perhaps creative individuals looking for extra space to act as a private workshop. (Designed by the team at ADDP Architects.)

The showflat is in bold exciting colours to cater to those with adventurous tastes, with dark wood paneling for a contrasting warm cozy ambience. A large tinted mirror highlights and emphasises the luxurious double volume space.

A cosy corner acts as a quiet reading alcove. The worktable is set parallel to the window to allow the occupant to enjoy the view whilst at work.

In the master bedroom, the mirror above the paneling highlights the generous high ceiling. 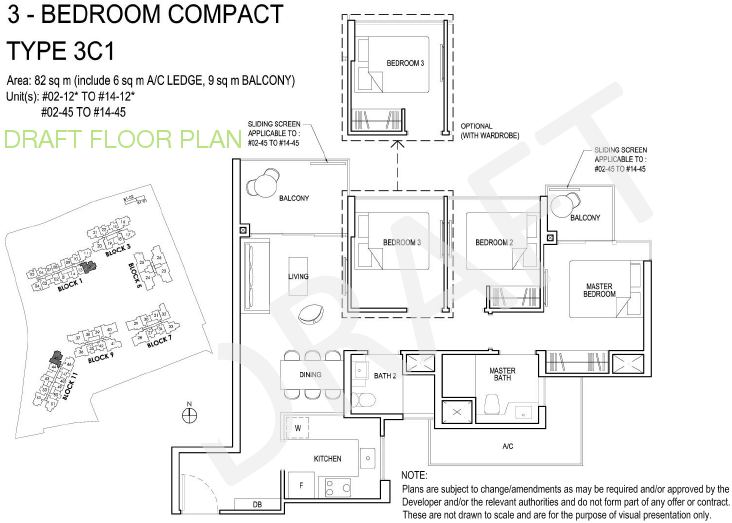 This unit would suit a small family, perhaps of around 4 to 5 occupants. Such as working parents, with young or teenage children.

The entranceway is tucked in, to maximise privacy. The rest of the unit is pretty efficiently designed, with little space wastage, which makes it possible to fit in a good number of functions within the small envelope.

In the show unit, a common space in the form of a study area has been created adjacent to the living room, encouraging the family to spend time together while pursuing separate activities. The parents can be working at the desk while one child watches TV, and another plays in a corner. Yet they are all in view of each other and within earshot, opening up the lines of communication among them.

In one bedroom, a desk is cantilevered at the foot of the bed, creating an unlikely study area from an otherwise unusable space. Here, books can be stored on the cantilevered shelves as well.

The master bedroom gives the parents a place of their own, to relax and chill out in, with its own balcony. 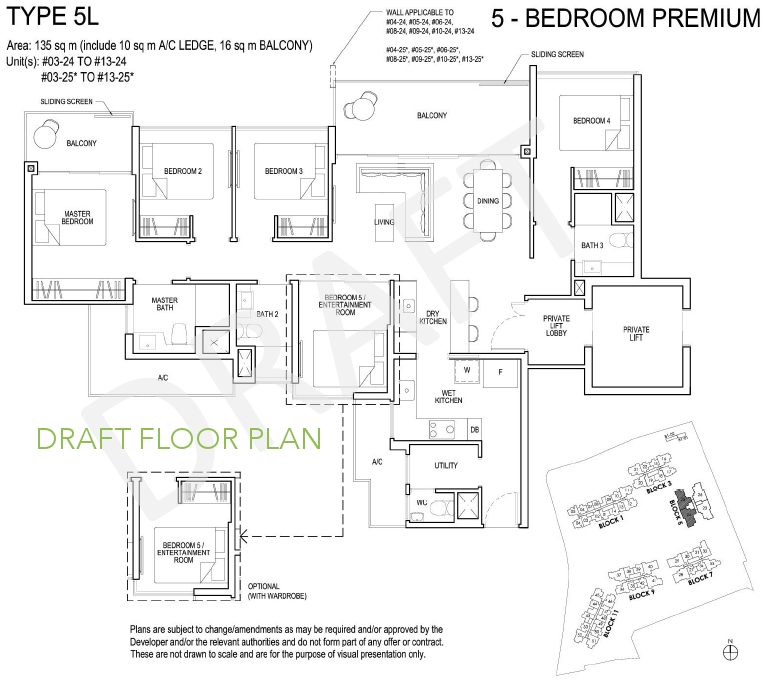 This unit type has its own private lift, with a separate service back door.

It comes with a junior master bedroom near the entrance foyer. So you can reconfigure it (at your own cost) into a dual key unit, if you prefer.

Please register here if you would like to view the Grandeur Park showflat.

Note that these are just rough estimates, and that the actual figures will be determined at a later stage closer to completion of the project, subject to market forces then. (Interestingly, the maintenance fees here are very similar to those for Leedon Green, with the monthly fees for their respective one bedders starting at $240, going on to $290 for the 2 bedders, and so on. Even though Leedon Green is more a luxury product in District 10.)

The land sale for this project garnered a total of 8 bids at the close of its public tender by URA in February 2016. Chip Eng Seng’s subsidiary, CEL Residential Development, won the tussle with a top bid of S$419.38 million. This translates to S$8,186.54 per sq m, or $761 PSF PPR (per sq ft per plot ratio) for land cost.

The 2nd highest bid was submitted by Allgreen Properties. At S$415.89 million, or $754 PSF PPR, it was just 0.8% lower. It marks a recent trend where top bids are not as far off the others as before. Could well indicate that sites are being sold at more conservative values, which augurs well for buyers.

“That the site was triggered from the Reserve List, indicates developers are maintaining a healthy interest in sites, especially in those with a relatively palatable quantum & with time on their side,” he added.

CEL Development proposed a condominium development with full facilities, in a public statement to the Singapore Exchange in February 2016. According to the statement, the site, currently covered by dense trees, will have around 720 residential apartments and a childcare centre. 500 sq m or 5,382 sq ft, of the maximum 51,228 sq m of Gross Floor Area (GFA) is set aside for the child care centre.

Taking into account the remaining GFA, and assuming financing, construction & overheads of $400 PSF on top of the $761 PSF land price, break-even could translate to around $1,160 PSF.

This might work out to an average Grandeur Park Residences price of between $1,350 to $1,450 PSF, depending on the unit size, level and facing. This is just slightly below the expected launch pricing for the Penrose at Sims Drive. (Note that Penrose, though closer to the CBD, requires a 6 minute walk to the nearest MRT station.)

Note: Bear in mind that average pricing usually reflects pricing of mid-size units, like the 3 & 4 bedroom units. PSF pricing of one & 2 bedroom units are usually a fair bit higher than the average PSF for a project.

CEL paid 3.8% less for the Granduer Park site than what Sherwood Development paid in October 2012 for the adjacent Glades condominium site. $761 PSF for Granduer Park compared to $791 PSF for Glades.

Average selling price for The Glades is around $1,425 PSF. As the Glades is on the same side of Upper Changi Road, and the same walking distance from Tanah Merah MRT station, it could give a pretty good idea of what Grandeur Park Residences price range to expect.

Despite all the bad news in the press, there is actually not much competition around here where new developer units are concerned. That’s because neighbouring projects have substantially sold out. Urban Vista is sold out, as are Optima and eCo. The Glades is over 90% sold.

See this link for the news article report on the land sale (opens in new window).

Please register here to receive updates on the Grandeur Park prices once available.